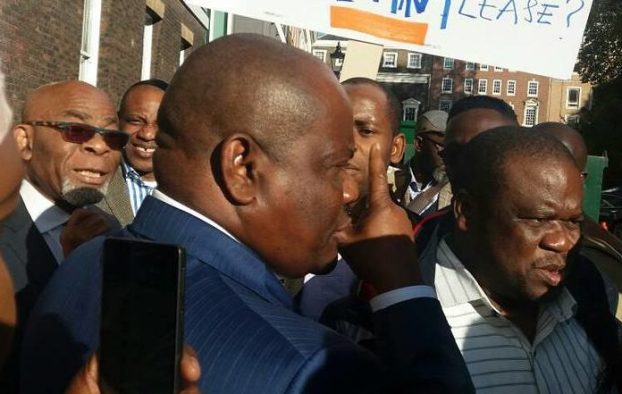 Rivers State Governor, Nyesom Ezenwo Wike has alleged that the Central Bank of Nigeria (CBN) Governor and the Chairman of Economic and Financial Crimes Commission (EFCC) have directed Managing Directors of banks to deny Rivers State cash during the weeks of 2019 Election.

Governor Wike said that he received the information on the illegal cash strangulation of the Rivers State by few Bank Managing Directors who attended the meeting with the CBN Governor and EFCC.

Addressing thousands of supporters during the PDP Campaign Rally at Ogu/Bolo Local Government Area on Tuesday, Governor Wike said this unconstitutional initiative by the APC Federal Government will fail woefully.

He said: “The CBN Governor and the EFCC Chairman invited the Managing Directors of Banks and told them to deny Rivers State cash during the elections. They told them to strangulate Rivers State.

“We have passed that stage. Nobody can gag us. Before now, we prepared for the elections. They should not bother, because we are ready”.

The governor said rather than cry over the insistence of the international community that the APC Federal Government should conduct credible polls, President Muhammadu Buhari should emulate Former President Goodluck Jonathan who organised free and fair elections and lost.

“In 2015, the APC went to the International Community and got their support. They supported them and the PDP lost.

‘Today, the APC Federal Government is crying because the international community is insisting on credible polls.

“President Muhammadu Buhari should conduct credible polls and earn international respect. Buhari should emulate Former President Goodluck Jonathan. He should not rig with security agencies because it will not work”, he said.

The governor declared that PDP is ready for the forthcoming general elections as the party is preferred by Rivers people and has a history of resounding electoral victories.

“PDP is ready for elections in 2019. We have won all previous elections in the state. In 2015, they claimed we won because of Jonathan. But we won all the rerun elections under Buhari administration, except the ones they snatched illegally.

“If not for their planned reliance on security agencies, nobody will collect APC nomination forms. There is no imprint of APC anywhere in Rivers State “, he said.

He charged the people of the area to vote for Atiku Abubakar and other PDP candidates.

The governor announced that he will start the electrification of the area. He stated that during his second term, his first project would be to connect Wakama to Ogu by road.

Governor Wike urged the people to remain faithful to the PDP because it is the only party that considers the welfare and development of the people.

PDP Candidate for Ogu/Bolo State Constituency, Evans Bipi said the area is purely for the PDP. He said that nobody can steal the votes of Ogu/Bolo people.

He said that PDP has no rival in the area. He said that the people will continue to support Governor Wike.

Chairman of Ogu/Bolo Local Government Area, Navy Captain Erasmus Victor (Rtd) , urged the people to vote for the PDP because that is the way to sustain development.

Director General of Rivers State PDP Campaign Council, Ambassador Desmond Akawor said Ogo/Bolo people are now part of the movement of progress as they are fully in support of Governor Wike.

He said that the Ogu/Bolo land by their mass mobilisation have shown they are committed to stopping the wind of destruction represented by the APC.

Former Commissioner and Rivers State Abuja Liaison Officer, Hon Vincent Nemieboka said that the people will deliver the area to the PDP because of the achievements of Governor Wike

According to him, all the APC members in the area defected to the PDP and declared their support for the re-election of Governor Wike.

Former Leader of Ogu/Bolo APC, Mr Tamuno Jonah said his defection is home coming and aimed to consolidate the re-election process for the Rivers State Governor.

In less than a week, the Peoples Democratic Party [PDP] will conduct it presidential primaries to select its presidential candidate for the 2023 presidential elections. Already, the presidential aspirants, in the last few weeks, have traversed the many regions of the country interacting with delegates of the PDP seeking for their votes.

As the primaries draw near, the major aspirants can be seen clearer.
This is as the eye of the storm sharpens. Popular opinion points to Bala Mohammed, Abubakar Atiku, Nyesom Wike, Bukola Saraki and Peter Obi as the aspirants with best opportunity to emerge victorious at the presidential primary.
A recent poll was conducted by a United Kingdom based polling non-governmental organization – Data Analytics UK – probing the possible outcome of the PDP primary of the five aspirants through scientific sampling of the delegates.

“Data Analytics had deployed a team of data aggregators and sampling experts to the six geopolitical zones and virtually all the states in Nigeria and the FCT since February 2022 to conduct progressive sampling of delegates preferences across the indicative thresholds and criteria.

In terms of the geopolitical regions, the results indicate Bala Mohammed as highly favored cumulatively.

The North East region where Bala Mohammed hail from, the results show over 65% of the delegates will vote for Bala Mohammed.

According to the delegates, Bala Mohammed had been highly instrumental towards the upkeep of the PDP in manyof the North East states following the loss at the general elections of 2019. Senator Bala Mohammed sustained the PDP in Gombe, Borno and Yobe State, ensuring regular payment of salaries for the administrative staff and services costs.

This, he did silently with only the delegates being aware of the gesture.

In the North Central region, the analytical data shows similar trending from the delegates.

The same holds true. Bala Mohammed, according the polling data, is expected to sweep the votes of the north central delegates with 57% of the votes.

During the period while Bala Mohammed held sway as the Minister of the Federal Capital Territory [FCT], the PDP of the north central states benefited from Bala Mohammed’s goodwill and welfare activities.

Bala Mohammed is reported to have assured the executive officers of the party within the North Central states were allocated lands within the FCT. He also shared operational vehicles to each state exco of the region.

In the southern regions, Bala Mohammed breaks even. Analysis show his favorability ratings to rest majorly on his liberal mindedness and candid nature.

His role in ensuring stability and safe transition from Yar’dua administration to Jonathan administration remain unlost in the minds of PDP of the southern regions.

It is expected judging by the resulting of the polling analysis for Bala Mohammed to riding to victory come next week’s exercise.

The Governor of Bauchi State, during the last few weeks had embarked on a comprehensive tour across the 36 States of the nation canvassing for support and spreading the gospel of Nigeria First agenda.

Sen Bala Mohammed, the leading PDP presidential aspirant, has pledged to run an inclusive government where no person, region or demographics will be left behind if he secures the party’s presidential ticket and wins the 2023 presidential election.

The advocate of the Nigeria First Agenda disclosed this on when he addressed hundreds of enthusiastic and hugely motivated party delegates from FCT, Anambra, Ebonyi and Enugu states on Thursday 12 May and Friday 13 May, 2022.

This was contained in a press release issued by the Spokesman of the Bala Mohammed presidential campaign who also doubles as its Ag Director General, Prof Udenta O. Udenta where Senator Bala Mohammed who stated that Sen Bala Mohammed called on the delegates to join him in retrieving, rescuing and renovating the the country with knowledge based solutions.

Prof Udenta further added that Bala Mohammed’s meeting with the FCT and South East delegates yielded fruitful results. “We are delighted by the enthusiasm and cooperation expressed by the delegates of FCT, Enugu, Anambra and Ebonyi.

It’s incredible how the delegates effortlessly connect with Sen Bala Mohammed’s powerful message of hope and national recovery with each region and group contributing their quota to that effort. Sen Bala Mohammed’s presidential campaign is non an unstoppable movement no doubt about it”.

Prof Udenta who explained that Senator Bala Mohammed understands the tenets and spirit of self actualization urged PDP delegates across the country “to give their support to a visionary leader who is fully prepared for national sacrifice, who is tried and trusted and whose compelling life journey and exposure as a journalist, civil servant, senator, minister and governor has equipped with the skills set to tackle the myriad of frightening problems this clueless APC administration has bequeathed to the nation”.

“Under the watch of a Bala Mohammed presidency, he will leverage on the nationalistic instincts inherent in Nigerian citizens to drive national development both from the individual and from the community in a vertical and horizontal manner”, Prof Udenta continued, while also expressing gratitude to the stakeholders and delegates for the warm reception and their pledge to support the Bala Mohammed Nigeria First agenda. “And we are confident Sen Bala Mohammed will get their support”, he concluded.