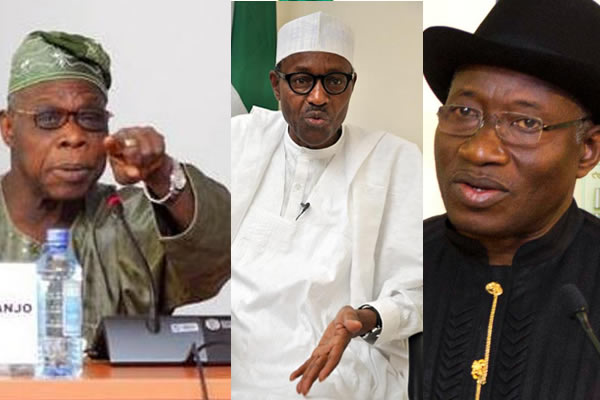 President Muhammadu Buhari on Tuesday met behind closed doors with members of the National Council of State at the Presidential Villa, Abuja.

The meetings started at 11.a.m prompt at the Council Chamber.

The meeting comprises of past presidents and heads of state, Chief Justices of Nigeria (CJN), leadership of the National Assembly, and state governors among others.

As soon as he arrived at the Council chamber, Buhari went round to have a handshake with some of the past leaders including Obasanjo.

Without listing the details of the agenda during the opening session, the Secretary to the Government of the Federations, Boss Mustapha said that the meeting will discuss five-point agenda.

But issues expected to be considered at the meeting included the National minimum wage, and confirmation of the appointment of the acting Inspector General of Police, Mohammed Adamu.

The forthcoming general elections and security of the nation are also expected to engage the attention of the Council of State.

The meeting was still in progress at the time of filing this report.

We Must ‘Theme’ Up With Sanwo-Olu To Revive Lagos Why

Aura by Transcorp Hotels, the online booking platform which allows people to book hotels and short let apartments, experiences, and order food anywhere in Nigeria, has received a Special Recognition Award for Tourism Innovation at the 5th edition of the Nigeria Tourism Awards.

According to the organisers of the award, the recognition is aimed at celebrating industry icons who have contributed to the growth of tourism in Nigeria.

“We are proud to receive the Special Recognition Award for Tourism Innovation less than a year after our official launch. With aura by Transcorp Hotels, we cater to the three major things people think about when they travel – where they stay, what they eat, and things to do.

With our verified accommodation – hotels and apartments – and carefully curated experiences, we have over the past 10 months shown people reasons to travel within the country, whether for business or leisure, solo or as a family or group,” said Ifeoma Okafor-Obi Business Development Director, aura by Transcorp Hotels.

“With just a few clicks on our platform, users can be on their way to enjoy their best staycation ever, visiting hidden gems in different parts of the country and staying in hotels and apartments that feels like home, Okafor-Obi added.

Also commenting on the recognition, Dupe Olusola Managing Director/CEO Transcorp Hotels Plc, owners of aura by Transcorp Hotels stressed that the platform has proven to be a tool for revolutionising domestic tourism in Nigeria.

“World over, governments use domestic tourism as a tool to eliminate poverty, generate employment, improve economic growth, upgrade infrastructure, as well as support and develop local and national pride.

As Nigeria’s leading hospitality company, we have set the pace in providing a platform that shows people beautiful places to travel across Nigeria, and gets the perfect place to stay, improving the attractiveness of different destinations in the country,” the MD/CEO added.

“It is quite encouraging that our investment in aura by Transcorp Hotels to support the development of domestic tourism has not gone unnoticed.”

aura by Transcorp Hotels provides a great selection of exquisite properties at the best prices, carrying out verification on all listings on the platform to ensure 2 / 2 that guests are choosing from the right pool of options, and in keeping with the known high standards of the parent company Transcorp Hotels Plc.

Act Now to Avoid Another Violent Protest Worse Than End SARS in Lagos: NURTW to Sanwo-Olu

The National Union of Road Transport Workers (NURTW),Lagos chapter has called on the Lagos State governor Mr Babajide Sanwo-Olu to prevail on the suspended chairman of the union Alhaji Musiliu Akinsanya, to vacate the union’s office to avert another looming protest worse than End SARS.

Speaking through the caretaker committee chairman of the National union in Lagos state, Comrade Fatai Adeshina popularly known world wide as Akeweje Egbeda during a press conference in Lagos on Wednesday ask the governor to act fast.

Speaking with newsmen, Akeweje asked the Governor to instruct the embattled Lagos park management chairman popularly called MC Oluomo to vacate the office in accordance with the national body’s directives.

It will be recalled that the association has forwarded a letter to the state Governor on a proposed peaceful protest slated for tomorrow Thursday 19 of May, 2022.

The peaceful protest is slated to pick up from the Governor’s office in Alausa Ikeja, Lagos down to the NURTW state office at Agege, Lagos.

Akeweje told our correspondent that the embattled chairman of the union Alhaji Musliu Akinsanya aka Mc Oluomo has been told to vacate the office since April 2nd this year but has remained in the office in defiance to the instruction of the national leadership of the association.

According to Akeweje, “NURTW is the authentic body for transport business in Lagos state, we are all experience members of the union from different branch’s and unit in Lagos state, we are also card carrying members of the All Progressive congress (APC) under the leadership of our father who is Asiwaju BOLA AHMED TINUBU our incoming presidency come 2023.

Commenting on the protest, NURTW National Chairman, Alhaji Tajudeen Baruwa confirmed the proposed protest by its Lagos branch urging them remain peaceful even in the face of provocation.

Danbatta described the choice of the Minister as chair of the Forum as a worthy recognition of Nigeria’s leadership role in the global digital economy ecosystem, noting that Nigeria has continued to hold a front-row seat in the promotion of information and communication technology (ICT) as a driving force for national development since the assumption of office of the Minister.

“On behalf of the Board, Management and Staff of the Nigerian Communications Commission, I want to express our profound delight and congratulations to the Honourable Minister of Communications and Digital Economy, Prof. Isa Ali Ibrahim Pantami, on his well-deserved appointment by the International Telecommunication Union (ITU) to chair this year’s WSIS Forum”, Danbatta stated.

“The appointment did not surprise us at NCC, given the important role the Hon. Minister has been playing in driving fundamental digital economy policies, being implemented by agencies under his supervision, in order to boost the diversification policy of the Federal Government,” the EVC said.

“We are, therefore, happy to associate with the Minister on this feat, as it means greater recognition for Nigeria. The appointment is an indication that the world has continued to take notice of the giant strides of Nigeria’s digital economy under the supervision of the Minister.

The NCC will continue to do everything within its regulatory mandate to further support the Federal Government’s drive for ubiquitous, affordable and accessible digital services across all nooks and crannies of the country,” Danbatta said.

Following consultations with various stakeholders, the ITU recently notified the Minister via a letter, of his appointment as the 2022 WSIS Chairman.

The ITU is orgainsing the WSIS 2022 Forum in collaboration with other agencies with the United Nations with a focus on “ICTs for Well-Being, Inclusion and Resilience: WSIS Cooperation for Accelerating Progress on the SDGs”.

As has been noted elsewhere, the appointment of Prof. Pantami has given Nigeria, and indeed, the African continent, the unique role of coordinating the activities of the WSIS in its 20th year, following the WSIS Phase I meeting which took place in 2003.

The WSIS Forum 2022, which will be attended by several high-level stakeholders, including Cabinet Ministers from ITU countries, will serve as a key platform to discuss the role of ICTs as a means to bolster the implementation of the Sustainable Development Goals targets. The discourse will take place in the context of the mechanism for follow-up and review of the implementation of the 2030 Agenda for Sustainable Development (UNGA Resolution A/70/1).

The WSIS Forum also provides an opportunity to track the achievements of WSIS Action Lines in collaboration with the UN Agencies involved and provides information and analysis on the implementation of WSIS Action Lines since 2005. The Forum aims at enhancing cooperation, partnership, innovation, exchange of experiences and good practices in ICTs for sustainable development across the world.