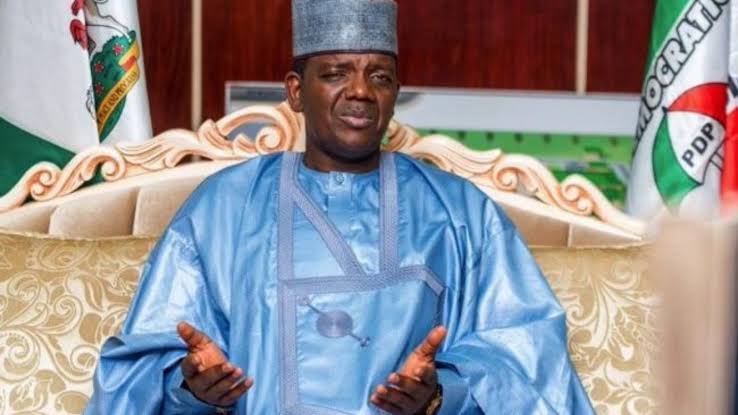 Revealed! How Zamfara Governor, Matawalle Bribed His Way Into APC 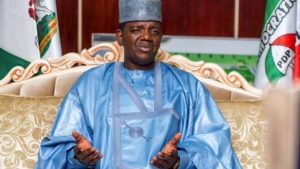 Fresh details are coming from the inner camp of Governor Bello Muhammad Matawalle of Zamfara State on how the Governor bribed APC stalwarts and federal level political office holders in government to decamp from the Peoples Democratic Party, PDP to All Progressive Congress, APC in June this year.

Our medium gathered that, these details came in a recorded telephone conversation with Hon. Yusuf Alhassan Kanoma who is one of the right hand State Assembly members of Governor Matawalle.

Hon. Kanoma was explaining to one of the Commissioners in the state why the state went broke and found it difficult to pay the October salary much less do other development projects when the information allegedly leaked.

In the conversation that took place with English and Hausa switches, Mr. Kanoma mentioned that the effort to decamp to APC cost Matawalle more than 10 billion naira which were all drawn from many shoddy contractual arrangements in the name of the State Government.

Some of the leading beneficiaries of the moneys that exchanged hand were the Ag. National Chairman of APC, Governor Mai-Mala Buni; Attorney General of the Federation Abubakar Malami and former Zamfara State Governor Ahmad Sani Yariman Bakura who played a guardian role to Governor Matawalle in the decamping process.

Kanoma also mentioned the occasion of the launching of vehicle distribution for judges in the state commissioned by the Attorney General as the entry point for getting the attention of the Minister of Justice for his share. The names of Governors, Bagudu of Kebbi State and Badaru of Jigawa all featured in the conversation with Mr. Kanoma with a tag from the share of the money. Also mentioned as beneficiaries were Femi Fani Kanyode and Minister of Communication and Digital Economy, Dr. Ali Isah Pantami.

Asked how he knew about these details, Mr. Yusuf Alhassan Kanoma explained that he got the explanation when he was applying pressure on the Governor to complete the road linking his hometown of Kanoma in Maru Local Government with the highway. He said the Governor had no option but to explain to him especially when he wanted him to spearhead the false accusation of connivance with banditry to two of his colleagues in the State House who are posing a threat to the Governor. He added that the Governor wanted him to facilitate the third review of the contract of the Cargo airport in Gusau which gulps a lot of money without much progress.

It could be recalled that Governor Bello Matawalle became the Governor of Zamfara State on a platter of gold under the platform of PDP when the court cancelled all the elective posts won by APC and gave the PDP. Although he vowed never to leave the PDP, Governor Matawalle was scared by the strength of the reunion of former Governor Yari and Senator Marafa camps in February this year which made it clearly impossible for him to win election against the two powerful politicians come 2023. Afraid of the ways in which he made life difficult to some of their supporters including imprisonment of some of them, he decided to join APC from the Federal level which made the use of humongous amount of money like the one mentioned by Hon. Kanoma necessary.

Commentators on the state of affairs in Zamfara observed that the state dived deeper into state of poverty and insecurity under Matawalle whose policy of dealing with the banditry was considered faulty.

His attempt to make peace with the bandits failed woefully; just like the present attempt of locking down market and telecom services in the state does not yield any positive result with bandits operating with impunity in most parts of the state.

In the conversation, Hon. Yusuf Kanoma was much worried by how joining the APC did not seem to solve Governor Bello Matawalle’s camp with all the uncertainty of State Party congress and the action of agrieved party members from both PDP and APC against them.

In less than a week, the Peoples Democratic Party [PDP] will conduct it presidential primaries to select its presidential candidate for the 2023 presidential elections. Already, the presidential aspirants, in the last few weeks, have traversed the many regions of the country interacting with delegates of the PDP seeking for their votes.

As the primaries draw near, the major aspirants can be seen clearer.
This is as the eye of the storm sharpens. Popular opinion points to Bala Mohammed, Abubakar Atiku, Nyesom Wike, Bukola Saraki and Peter Obi as the aspirants with best opportunity to emerge victorious at the presidential primary.
A recent poll was conducted by a United Kingdom based polling non-governmental organization – Data Analytics UK – probing the possible outcome of the PDP primary of the five aspirants through scientific sampling of the delegates.

“Data Analytics had deployed a team of data aggregators and sampling experts to the six geopolitical zones and virtually all the states in Nigeria and the FCT since February 2022 to conduct progressive sampling of delegates preferences across the indicative thresholds and criteria.

In terms of the geopolitical regions, the results indicate Bala Mohammed as highly favored cumulatively.

The North East region where Bala Mohammed hail from, the results show over 65% of the delegates will vote for Bala Mohammed.

According to the delegates, Bala Mohammed had been highly instrumental towards the upkeep of the PDP in manyof the North East states following the loss at the general elections of 2019. Senator Bala Mohammed sustained the PDP in Gombe, Borno and Yobe State, ensuring regular payment of salaries for the administrative staff and services costs.

This, he did silently with only the delegates being aware of the gesture.

In the North Central region, the analytical data shows similar trending from the delegates.

The same holds true. Bala Mohammed, according the polling data, is expected to sweep the votes of the north central delegates with 57% of the votes.

During the period while Bala Mohammed held sway as the Minister of the Federal Capital Territory [FCT], the PDP of the north central states benefited from Bala Mohammed’s goodwill and welfare activities.

Bala Mohammed is reported to have assured the executive officers of the party within the North Central states were allocated lands within the FCT. He also shared operational vehicles to each state exco of the region.

In the southern regions, Bala Mohammed breaks even. Analysis show his favorability ratings to rest majorly on his liberal mindedness and candid nature.

His role in ensuring stability and safe transition from Yar’dua administration to Jonathan administration remain unlost in the minds of PDP of the southern regions.

It is expected judging by the resulting of the polling analysis for Bala Mohammed to riding to victory come next week’s exercise.

The Governor of Bauchi State, during the last few weeks had embarked on a comprehensive tour across the 36 States of the nation canvassing for support and spreading the gospel of Nigeria First agenda.

Sen Bala Mohammed, the leading PDP presidential aspirant, has pledged to run an inclusive government where no person, region or demographics will be left behind if he secures the party’s presidential ticket and wins the 2023 presidential election.

The advocate of the Nigeria First Agenda disclosed this on when he addressed hundreds of enthusiastic and hugely motivated party delegates from FCT, Anambra, Ebonyi and Enugu states on Thursday 12 May and Friday 13 May, 2022.

This was contained in a press release issued by the Spokesman of the Bala Mohammed presidential campaign who also doubles as its Ag Director General, Prof Udenta O. Udenta where Senator Bala Mohammed who stated that Sen Bala Mohammed called on the delegates to join him in retrieving, rescuing and renovating the the country with knowledge based solutions.

Prof Udenta further added that Bala Mohammed’s meeting with the FCT and South East delegates yielded fruitful results. “We are delighted by the enthusiasm and cooperation expressed by the delegates of FCT, Enugu, Anambra and Ebonyi.

It’s incredible how the delegates effortlessly connect with Sen Bala Mohammed’s powerful message of hope and national recovery with each region and group contributing their quota to that effort. Sen Bala Mohammed’s presidential campaign is non an unstoppable movement no doubt about it”.

Prof Udenta who explained that Senator Bala Mohammed understands the tenets and spirit of self actualization urged PDP delegates across the country “to give their support to a visionary leader who is fully prepared for national sacrifice, who is tried and trusted and whose compelling life journey and exposure as a journalist, civil servant, senator, minister and governor has equipped with the skills set to tackle the myriad of frightening problems this clueless APC administration has bequeathed to the nation”.

“Under the watch of a Bala Mohammed presidency, he will leverage on the nationalistic instincts inherent in Nigerian citizens to drive national development both from the individual and from the community in a vertical and horizontal manner”, Prof Udenta continued, while also expressing gratitude to the stakeholders and delegates for the warm reception and their pledge to support the Bala Mohammed Nigeria First agenda. “And we are confident Sen Bala Mohammed will get their support”, he concluded.